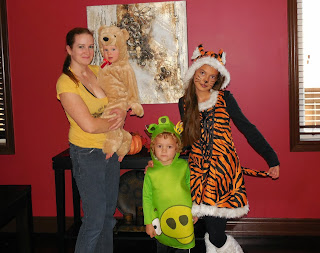 They're heeeeeeere! Well at least for one post. It's been a while! Life has been pretty chaotic. They say that change is the only constant in life. Michelle and I have certainly had a lot of changes in our lives lately. Change isn't easy, especially for a Taurus and an admitted control freak like me. At some point you just have to surrender to the fact that you can't control everything. Especially not a little redhaired fireball about to turn 15 months old.

Michelle was difficult since she was born but lately she's been IMPOSSIBLE. Though her vocabulary is up to about 250-300 words now (including phrases like "All done"), her favourite word, by far, is NO. She says no to everything. Even the things she wants. It's like she's testing me (and I'm failing. Beyond running out of patience at this point!) Her latest game is crying for her milk then saying no when I try to give it to her and hitting the bottle or throwing it. So you take it away and then she screams for it again. Maybe she doesn't know what she wants. Or maybe she just wants to give Mama a nervous breakdown. The worst is when I'm driving and she hurls it on the seat next to her then screams for it and I can't reach it to give it back to her. Sometimes I swear she's trying to drive me crazy. And it won't be much of a drive. I'm halfway there already!

Michelle only has milk from a bottle now. It was her own choice. Though I was planning to continue breastfeeding her indefinitely (at least once a day when I could) Michelle started weaning herself in early October until finally she refused to nurse at all and I had to give up. You would think that I would have been relieved. Since I've been back to work it has been increasingly difficult to breastfeed. I'm not always there. My milk supply seemed to adjust to the varied schedule. It produced as much or as little milk as was required on any given day, depending whether I was with Michelle or not. Maybe Michelle adapted to me not always being there by relying more on the bottle. Then when I tried to nurse her on the nights I was there, she was reluctant or frustrated. It got to the point where she just wasn't interested. She loves cold milk from her bottle. Increasingly independent, I think she likes the fact that she can control the bottle, hold it in her hands (or throw it away) and drink as much as she wants. She guzzles the milk (I can't even believe how much she can drink!) until the bottle is empty. Maybe she became frustrated because my milk production had probably gone down and it was likely more of a challenge to drink from the breast than from the bottle. I had been trying to wean her gradually but not entirely. I thought I'd get her down to just one feeding a day. I didn't want to upset her or make her feel rejected. Instead she rejected me. She literally pushed me away and reached for the bottle instead.

There are advantages of course. No more worrying about what I eat or drink. (I can load up on junk food, sugar and caffeine -- woo hoo! -- knowing that it's not going through to her anyway.) No more waking through the night to nurse her (although she still wakes me up asking for milk, in the bottle. Even more often than she used to nurse.) 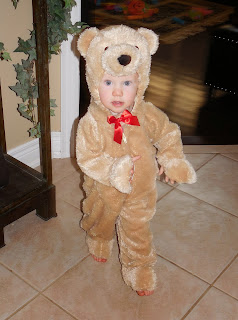 Instead of being relieved, I was a little sad. For me, nursing was a bonding experience. It was also a relaxing ritual at the end of the day. I would nurse her and we would both go to sleep. It was heartbreaking for me somehow to give that up. It almost felt like I was losing my baby. She's a toddler. She's becoming more independent. She wants to do things on her own. She doesn't need me quite as much. I know that when you stop breastfeeding it also wreaks havoc on your hormones so that probably has a lot to do with how hard it's been on me. There is also a lot going on these days. It has been a struggle. I've been stressed and maybe it has affected Michelle too. She rarely settles down before midnight anymore (though at least she sleeps in a bit later). She gets cranky every day even when she has a good nap in the afternoon. She fusses more through the night. To make matters worse she's been sick with a cold for the past week. With a runny nose and cough, she's been crankier than ever. She hates when I try to wipe her nose. Even with those grape-scented "Boogie Wipes." She fights me when I try to change her. Fights me when I try to get her to eat. It's a constant battle. Just when I'm at my wit's end and can't take anymore though she'll suddenly do something so sweet like take my face gently in her hands or run up and hug me really tight. I'm glad that she's such an affectionate, sensitive girl. I'm glad that she's so bright (everyone says she's advanced for her age. She says just about everything. Except "yes!" Though she could say the word months ago she refuses to say it now.) I'm glad that she's an expressive child -- when she's happy or excited it's beautiful to watch. The dark side of it is that when she's frustrated or tired or just feels like being defiant, she's a monster and it's exhausting to deal with.

I suppose it stands to reason that if she has the vocabulary of a two year old she might have the attitude of one as well. I've certainly heard about the "terrible twos." She has such a fierce temper already. She wants her way INSTANTLY or there is hell to pay. I know I'm at least partially to blame for indulging her. No one in their right mind would have given in to her whims to the extent that I have. The expression "spoiled rotten" comes to mind. Then again others have said that you can't spoil a child with love. She is healthy overall and intelligent. I tried to do all the best things for her. I wanted her to be happy. Maybe I created a monster. Now she's testing boundaries. Seeing just how much she can get away with. It is taking a toll on me. There was one night that I just cracked. Between sleep deprivation and stress and everything else I couldn't take anymore. She was crying and refusing to settle down and then I started to cry. All of a sudden she looked at me differently. She stopped crying. It was like a light went on and she realized "Uh oh. I finally broke Mama!" She reached her little hand out and started patting my arm as if to say "There, there Mama." It was so sweet. And then I sang "Two little birds" and we both finally got some sleep. 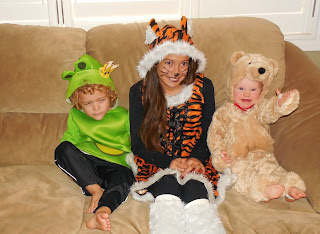 But enough about weaning and crying! On to happier news! Of course it's Halloween in a couple of days. It will be Michelle's first Halloween (last year she was far too little to take out Trick or Treating.) By the time I get home from work it will be pretty late so we'll just go to a few houses. I wouldn't let her eat the candy anyway (well maybe just a taste.) Of course I'll end up eating it (which is the last thing I need now since I'm probably gaining weight when I don't even have nursing to burn off extra calories. Although with the stress I've been under maybe I'm losing.) Michelle is going to be a Teddy Bear. She got dressed up with cousin Reggie and Shannon for some pre-Halloween photos (Shannon was on the way to a Halloween party anyway and I thought it would be cute to dress the kids up together.) 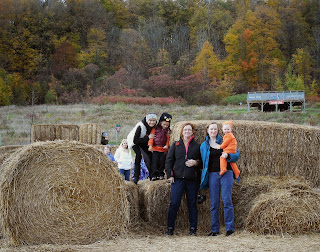 We also had a fun day at Springridge Farm posing with pumpkins, going through the Boo Barn and hay maze. Even though she was a little under the weather Michelle was thrilled to see the animals and experience the farm. I couldn't resist taking a hundred photos of course. I wasn't the only one. The place was a zoo with parents snapping pictures of their kids with pumpkins and hay bales and those funny boards with the heads cut out. It's photo op heaven. Luckily the rain held out until we were leaving and Michelle started to fuss but fell asleep and had a nice nap on the way back home. 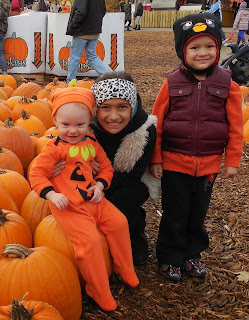 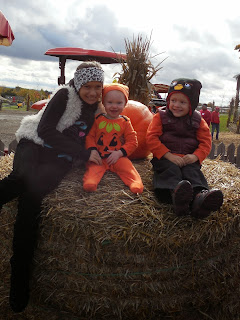 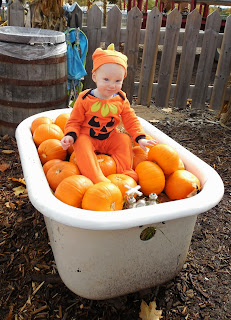 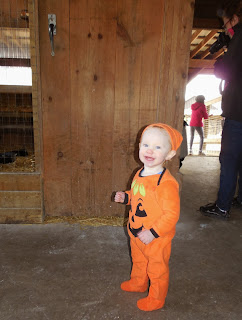 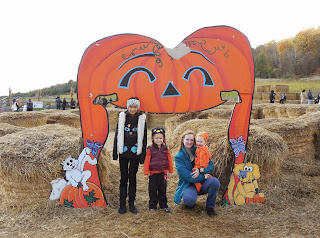 I have missed blogging because it was something I did for me and these days there doesn't seem to be any "me" time anymore. By the time Michelle settles down I'm exhausted and fall asleep myself. The past month, as difficult as it has been with all that was going on, has flown by. Time definitely seems to speed up the older I get. Blink and it's Halloween. Then it will be Christmas and another new year. It seems like Michelle was just born. Now she's growing into a little girl. A headstrong little girl at that. God help me when she does turn 2. Fourteen months has been a challenge. Imagine 14 years with the teenage hormones? Anyway, I'm not sure if/when I'll blog again. Maybe one in November? Maybe one for Christmas? This was supposed to be a "baby blog" anyway and I suppose by definition she's not a baby anymore. 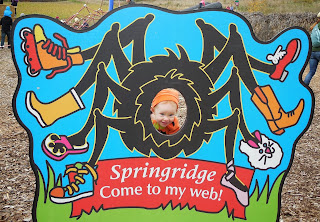 I saw a newborn baby in line at a store the other day. Well I heard her long before I saw her. The unmistakeable newborn cry could be heard a mile away. When I got closer and saw the baby, my heart melted. "How old is she?" I asked, smiling. "6 weeks," the Mom answered, wearily. I remember thinking how difficult things were at that stage. Now I look back and think that the sound of a newborn cry is so cute, so innocent I don't even mind it. It's crazy. Each stage you go through that you think is so hard, you look back and think it wasn't that bad. OK well maybe sometimes it was. But you still feel a twinge in your heart that those days are gone. A sentimental fool, I've always had a hard time letting go. I should remind myself, on the worst of days, when Michelle is driving me nuts, that someday I will look back fondly at this and think that her saying no constantly and throwing things and refusing to eat and sleep and anything else I try to get her to do was cute. Maybe.
Posted by Ann Marie Pincivero at 1:03 AM 2 comments: 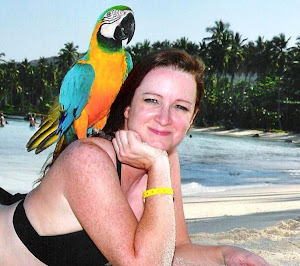 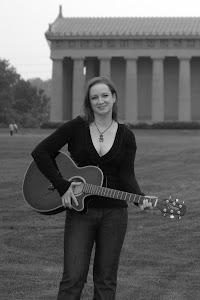 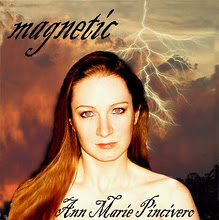 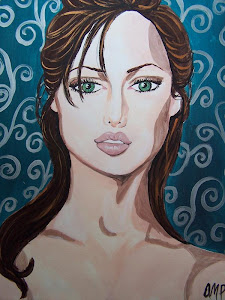 link to my paintings on Myspace